Who I am and who I’ll be 24/04/2020
We sat down with Amanda Burt and discussed pressures on women in the workplace, breaking down barriers that keep you from being yourself, and trusting your intuition.

I FEEL LIKE I HAVE DIFFERENT PRESSURES THAN MY PARENT’S GENERATION. I CAN DO WHATEVER I WANT, I DON’T KNOW IF THEY COULD HAVE DONE WHATEVER THEY WANTED, OR AT LEAST IT WOULD HAVE BEEN A BIT MORE ROGUE IF THEY HAD.

Amanda Burt      I don’t do a lot. I grew up with really sensitive skin so I couldn't use regular moisturizer or sunscreen. I was just this child that could not deal, and was lucky as a teenager; I didn’t have any acne or break outs. I barely wash my face. If I wear makeup it is mascara and maybe something on my lip. I will use a Micellar water to take off my makeup if needed. In the deep of winter and summer I will add a moisturizer, but even then I don’t like to have too much on my face. So that is my routine. I’m not a big product person. The way I know I look better is being happy, exercising, getting lots of sleep, seeing my friends. I love going to the Russian Banya,– my skin looks so much better after I do that. It is less about what I am putting on my face and more what is coming out through my face, if that makes sense.

AB      Yeah, I use Philosophy’s Hope in a Jar - one for night and one for day. I have had them for about 6 months. I have tried so many different ones and know those work for me and really like them.

AB      I like Glossier’s boy brow and their lash slick, and their lipstick. I forget what shade I use. They are pretty simple, and their formulas work for what I am trying to do, which is a pretty natural look. I use a MAC Foundation if I need to use one for whatever reason. For a really long time my signature look was a red lip, I would use nothing else. The first tube I ever bought of red lipstick was when I was a 17 in Italy. I had to change trains and had an hour so I went to an Italian pharmacy and bought a Dior 999 lipstick. It still is my red; it isn’t my signature colour anymore but something I wore for a long time and still think it is really beautiful. Every once and a while I put something else on. I have always felt that I want to look the same day and night. Travelling, being on the road, at parties, maybe I want to look a little more put together but when I add elements that fundamentally change the way I look I don’t feel comfortable.

AB      People tell me I should moisturize so I don’t age into something terrible so I am trying to do that. I love to tan and I’ve realized maybe I shouldn't do that. I still do it, but will put on a bit of sunscreen on to protect myself. Other than that I still have the same routine as like a ten year old. 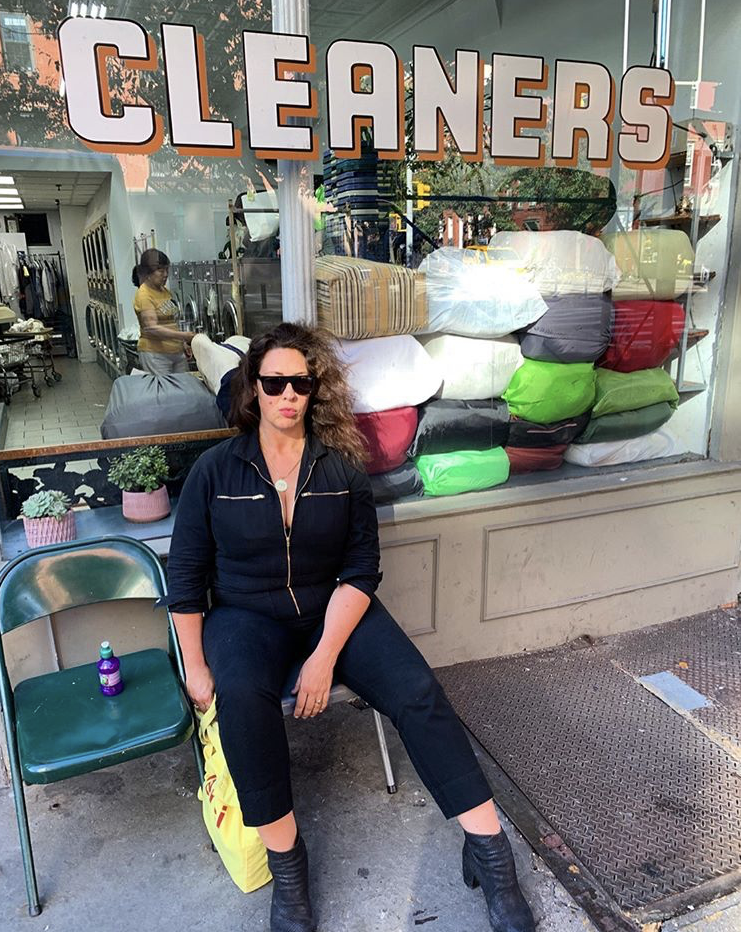 YOU HAVE THIS SENSE OF WHAT OTHER PEOPLE ARE DOING WHO AREN’T IN YOUR ENVIRONMENT, AND INFLUENCE ISN’T JUST COMING FROM THE MALL OR FROM THE MOVIES. YOU CAN FIND INSPIRATION FROM ALL OVER THE WORLD, FROM ANY AGE, AND AT THE SAME TIME YOU CAN CHOOSE HOW YOU WANT TO BE.

AB      No, but that is me right now. I certainly have over the years. I am 5’10, I was 5’9 when I was twelve. So as much as I appreciate how I look now, I looked essentially the exact same when I was 12, and that brought a lot of attention both positive and negative. I tried to fit in, dress like other kids, so I didn’t seem like such a freakishly tall adult woman. I wanted to figure out how could I still be a kid even though I looked totally different. I worked at a more corporate place for a long time, and I liked it but I did feel pressure to dress in a more business casual way, which is really not my vibe. I felt less and less like myself when I was trying to fit in. I felt really lucky in my final years working there, and now in the work I do; I dress the same day or night. I don’t feel like I have to fit in now, and it took me a long time to get the confidence to understand I could do that.

19/99      As you’ve gotten older have you felt pressure to hit certain milestones or achievements?

AB      100% and I can’t imagine anyone who would say no. Obviously as a human there is a lot of pressure to achieve, especially in this era where it seems like anyone can be an expert, or anyone can be famous. I have always felt that no matter how good I was my job, I should have more success and be more out there. As a woman I think there is a lot of pressure to determine how and when you are going to have a family, and who that is going to be with. Whether that is going to be on your own, how that interacts with the work that you do. And that has been a conversation that I don’t think I was prepared for when I was younger, that it would be put upon me. There has been a lot of pressure, as a woman, in the roles I’ve done professionally; I have had to be better than men at them. I often worked with men, men that were older than me, and I’ve often had to lead those teams. And I love it. But also opportunities wouldn't necessarily come my way because there would be an expectation that I would jump ship to have a kid or two. So that has been a tough thing to have to realize and negotiate, and also to say well, if I am trying to create my own world and own work, what is it that I do want to do? Somebody really wise once told me that the only person who really cares about my career is me. That has been my thing in the last couple of years, which has gotten me to where I am now, and there are a lot more exciting things down the road. But there have definitely been a lot of challenges.

AB      I know what is it supposed to mean. Age appropriate is a funny idea. I grew up in a time when that kind of collapsed. When I was growing up the idea of being 30 was shocking. I remember when my mum turned 30 and it was like ‘Oh my god, you are so old’. I obviously don’t think that now; but I really really remember that. I do think that things are different now; we are in this new time where things loop around quicker. If you are 55 you may be wearing the same thing as your kid that is 17, or you college who is 32 may be wearing something that is a bit more buttoned up than you do. It is blamed a lot on the internet age, and social media. You have this sense of what other people are doing who aren’t in your environment, and influence isn’t just coming from the mall or from the movies. You can find inspiration from all over the world, from any age, and at the same time you can choose how you want to be. I don't’ think we can read people based on how old they are, or align themselves or how they look, or what they do at night. If they go to rock shows, or the gym or are at home with their four kids; all those people could look exactly the same and be totally different ages. So I think the concept of age appropriate has shifted, but I still think it can be used as a negative that people feel if you are a certain age you shouldn’t be doing certain things.

AB      Don’t worry, really. As I get older I take away more of the barriers to being myself. And I have realized that it is by being myself, and trusting my taste and intuition and doing the work I want to do, that is what is getting me things that are better and bigger and making me happier. So chill, don’t worry.

AB      When I am happy and doing things I want to do, the person I see in the mirror is much more beautiful and me than when I am in a space of stress or if I am overwhelmed with work, or just not happy. Which often comes from being forced into things, or just everyday stuff, modern life, and I definitely don’t feel like myself. The closer I can get to being relaxed and finding time for myself - that makes me feel beautiful. I have had my makeup done a lot, worn crazy outfits, those don’t make me feel beautiful. When I am in a time where I am surrounded by friends, having an amazing meal, maybe I am wearing something special, but it is really just the feeling more than the visual. The feeling that comes through is what makes things work.

AB      No, not at all. I think about health; what I can do to stay active and the physical aspect. I am excited about aging; I got a lot happier when I turned 30 and a lot more relaxed when I turned 40. So I can only imagine what happens when I turn 50, and 60 and 70. Everything has been better every year of my life so aging to me is a gift.

AB      I feel like I have different pressures than my parent’s generation. I can do whatever I want, I don’t know if they could have done whatever they wanted, or at least it would have been a bit more rogue if they had. I wonder when they stopped worrying and learnt to just be; it would be: when did you learn to chill?

AB      I am a really curious person, so for me no. But that would be an ideal, which is an ideal for myself. I think people can though; if you have a job, and a mortgage kids and a partner who has their own stresses, having new ideas and new energies seems like it would be the bottom of the list for a lot of people. I don't think there is a reason for people to stop being curious but it is understandable when people feel like they can’t and I think that is how people feel they are stuck, or that certain things aren’t for them. But I would argue that everything is for everyone.