Who I am and who I’ll be 31/07/2020
Katherine Shark recently graduated from Maryland Institute College of Art, with a double major in Fibers and Humanistic Studies. In her thesis paper, she explores the history of beauty rituals as community, and how women are re-writing this history in the digital age.

In the past, patriarchy and capitalism have taken a dump on beauty rituals saying that this is something women do because they are vain, and superficial and because they don’t care about higher things like philosophy or whatever higher things are supposed to be.

19/99       Can you introduce yourself, and tell us a bit about what you studied and your thesis?

Katherine Shark       My name is Katherine, I’m from California, and I just graduated with a Fibers and Humanistic Studies dual major with a minor in Instrumental Fashion & Art History, from the Maryland Institute College of Art. The Humanistic thesis is something I developed over my four years at school. I did my thesis paper on beauty, and beauty rituals as a form of community and as a source of bonding for women and femme people. For me beauty has always been a passion, and is something I’ve been dismissed for loving; it has been regarded as a negative thing, as vain or pandering to patriarchy. I’ve found beauty being a way for my friends and I to connect and there is something much deeper that I’ve found in it. Self-expression and self-esteem is something that has been discussed before but I realized that people don’t talk about how much time women spend with our friends, with our moms, and with our grandmothers learning how to take care of ourselves, and how these beauty rituals create friendship and bonding between women.

19/99       Can you tell us a bit more about how and why beauty rituals have been undocumented in the past?

KS        In the past, patriarchy and capitalism have taken a dump on beauty rituals saying that this is something women do because they are vain, and superficial and because they don’t care about higher things like philosophy or whatever higher things are supposed to be. So it has been seen as this frivolous thing. We have seen this in the trope of women and girls, who have this internalized misogyny, who say they aren’t like others girls, that they don’t care about makeup. In order to be seen as intelligent, valid and respected we don’t want to talk about this, women don’t talk about the time they spend on their own appearance. Even if they really love it, they don’t discuss it because it has historically been seen as this lesser thing, so it hasn’t really been documented. The conversation that women have, one on one, with each other on their own time hasn’t been documented. And when it has been, it is often by male historians who are looking back so they give a generalization and not a nuanced perspective on it. With the internet women and femme people are finally putting out their own thoughts on this and creating communities around it, and being able to put out, in their words, why they do the things they do around beauty and how it makes them feel.

KS       I found in my research that a lot of women and femme people experience a coming of age through a makeover, which I think is an interesting phenomenon. Makeovers are dismissed as a very consumerist, surface level thing, but I think that is only true in the context of a makeover show. There are all of these experiences that people have with older family members teaching them to do eyeliner or their mom teaching them to apply blush. It is a bonding moment for women where you can establish a mentor – mentee relationship and it is very soothing. It isn’t just about how to do your eyebrows, it is about learning to take that time for yourself and learning what you want to do with your face, how you want to look, to mess around and experiment, and express yourself.

KS        I think it is really interesting watching ‘Get Ready With Me’ videos because it demystifies the no makeup makeup look. But the idea of a no makeup look I am kind of on the fence about and I think the essence of it is a patriarchal one. Something I found in my research about fashion, but I think that applies to makeup, is this idea of being able to transform your body and appearance into an aspect of the American Dream. If you can work really hard to achieve fame and money then you can work really hard and achieve this perfect appearance and the no makeup makeup routine can play into this idea. In the 1920s people spoke about how women were liberated from the corset, but some fashion historians say that didn’t really happen – the corset was just internalized and turned into diet culture, which is now a multi-billion dollar industry. And I feel like the no makeup makeup routine can be that: it can be an internalized thing. So I think that women, and people who use makeup, need to self analyze as to why they are doing it. But it is something I do because it makes me feel better, and even if I don’t have time to do a really elaborate look it is still 5 or 10 minutes I can take for myself. It is something that isn’t always positive but is something that can be if people take consideration and self-awareness into how they are doing it. It is nice to see a broad variety of the people who are giving their take on this too. 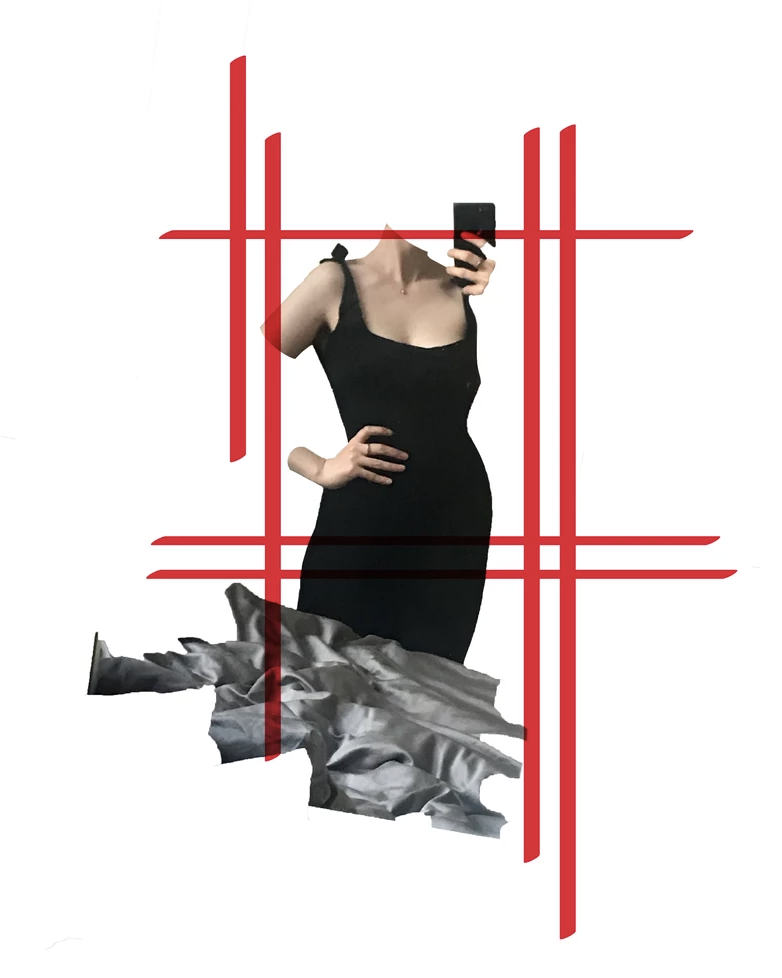 even if people don’t like the way I look, or have an opinion on it, that doesn’t really matter. As long as I find something I like and stick to it, people are going to respect that. 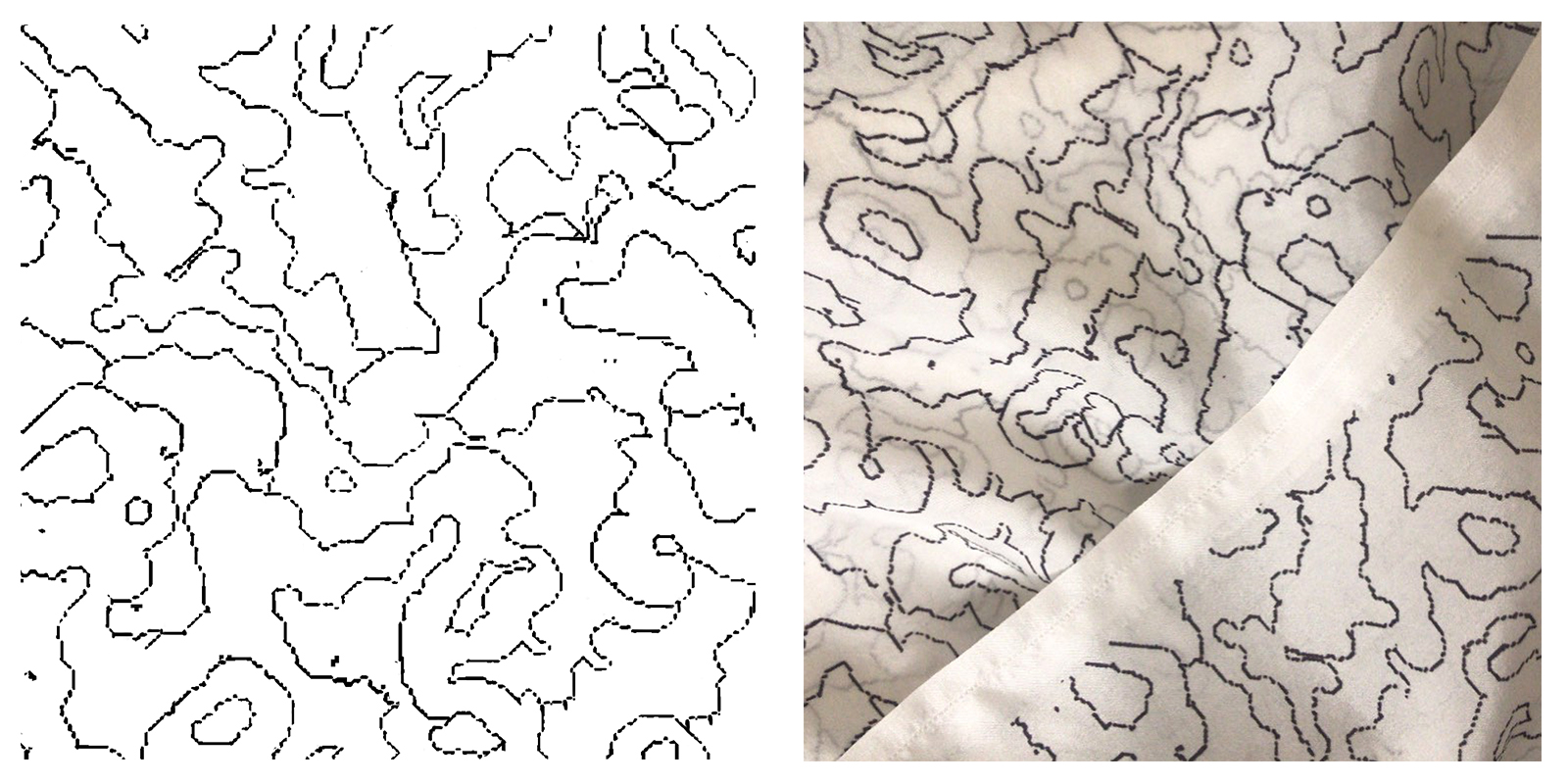 KS        My daily beauty routine is pretty simple; my skin is really sensitive so I try not to put too much on it. In the morning I will spray with a little facial mist, and then put on a La Roche-Posay moisturizer. I use a little bit of an NYX Foundation and a NARS concealer. I’ve got a soft spot for Glossier – I use their Boy Brow and Cloud Paint in Storm, which is the perfect blush for me. I use their Haloscope because I love how glittery it is. I don’t really use lipstick because it is very high maintenance for me. My favourite thing for colour is a L’Oreal Mascara which is cobalt blue. You can’t really tell because my eyelashes are dark so it just looks black but when you get up close there is this little touch of bright blue which I think is really fun and playful, and I love that. For my beauty routine in the evening I wash off my makeup with La Roche-Posay’s Hydrating Gentle Cleanser because it is really gentle, and I use a Foreo brush to make sure I get off all my makeup. I use a Curology Serum which something I really like because it is simple and results based, and then I use the First Aid Beauty moisturizer and then I go to bed. Oh and I do use sunscreen in the morning of course. The Purito Centella Green Leaf SPF 50 is really great for people who have really red skin.

KS       Definitely. I’m someone who struggled with anorexia for many years of my life and, even still I feel this pressure, thinness is a big part of it, to have every aspect of my appearance controlled. But something that has helped me - makeup was a big part of this - is seeing my appearance as something that I can play around with and experiment with. At the end of the day I can’t really control my weight, I mean I could but it would destroy my quality of life and health in the long run, but makeup is something that gives me control of how I look, and I can do something kind of weird, interesting and fun. Makeup became a way I could express myself creatively and do something with my appearance that I wanted to do in a way that wasn’t as negative and damaging to myself. I still feel pressure to look a certain way in terms of my skin, it is probably never going to flawless. I’m probably always going to have redness and acne but I’m learning to make my peace with that, and at the end of the day if I have some acne that shows through my foundation it’s fine. I used to have this very long blonde hair and in my senior year of college I cut it all off into a pixie cut, Jean Seberg style. It was something I’d wanted to do for years and years but I was always too scared about it looking bad and how it would grow out, but I finally did it because I realized the worst thing that could happen is that it wouldn’t look that good – and that’s not the end of the world. I loved it – I loved having a pixie cut. I think I’m going to get it again. Something else I realized was even if other people didn’t like the way it looked, or I didn’t like the way it looked, the fact that I committed to doing such a drastic cut, people would respect that and I think that changed my perspective on beauty – even if people don’t like the way I look, or have an opinion on it, that doesn’t really matter. As long as I find something I like and stick to it, people are going to respect that.

KS        Being around my friends because they hype me up and I’m able to relax around them. Also when I’m able to take care of myself; get enough sleep, exercise in a joyful way, eat well. My experience with anorexia was about chasing this ideal aesthetic and appearance but I ended up making myself look awful. My skin was cracking, dry and bleeding, my hair was falling out in chunks and I looked so miserable, you could see how unhealthy and sad I was. So now, when I’m able to have healthy nails, and hair, and my skin looks healthy it makes me feel beautiful because that means I am taking care of myself.

KS       For some people maybe. I think it is a mindset you have to have in your day-to-day life to push yourself to be curious. I think it is hard to cultivate that mindset. I think that a lot of learning and growing involves admitting you are in the wrong and that is hard, but I think it is something people can do their whole life, as long as you are conscious and work towards it.