Who I am and who I’ll be 29/10/2020
Originally from Amsterdam, Sil Bruinsma moved to New York to pursue his career as a makeup artist after developing his portfolio in Paris. Inspired by the shift from corrective to expressive makeup, he shares his perspective on the individualistic future of beauty and makeup.

I think over the years the corrective side of makeup has taken over too much, and I would love for people to go back to the side where it is about creativity, not so much about presenting the perfect idea of yourself.

Sil Bruinsma       I am from the Netherlands, I grew up in a small town about an hour outside of Amsterdam. Around 1993, I moved to Amsterdam to study fashion. I dropped out after a year; I was meeting all of these creative people, going out a lot and thought it was much more fun than studying. For about a year and a half I was a part of club life in Amsterdam; during that time I became friends with a Dutch makeup artist, who asked if I was interested in assisting him. So I did and one thing led to the next, and for two years I started doing my own jobs in Amsterdam. Then I moved to Paris, where I spent about three years, working and building my portfolio. In 2005, I moved to New York and that is where I have been ever since. I always really loved New York, it has been great for work, and has always been an inspiration.

SB      Makeup is about self-expression and individuality. It is a way to be creative, a way to transform. I really believe in the power of self-expression through makeup. There is a corrective side of makeup as well, which is fine, it is part of it. But to me the real power of makeup is when it is used to express one’s self. I think over the years the corrective side of makeup has taken over too much, and I would love for people to go back to the side where it is about creativity, not so much about presenting the perfect idea of yourself.

19/99       Was there a specific time that you really noticed a shift from the creative to corrective use of makeup?

SB      It has always been corrective in the way makeup has been marketed by makeup companies; you know, the beautiful young girl. Through social media it has taken on such an enormous flight; it is really about a certain unattainable perfection through filters, retouching, and the way makeup is actually applied. It becomes almost like a caricature, it becomes a mask and it is hard to see the actual person underneath and everyone starts to look the same. I understand why people are drawn to it at first, because it does really change you, but I feel that it is too much of the same – the same eyebrows, the same lash, the same lip. It takes away so much of the individuality of the person. I love to see a type of beauty that is more individual and honest in a way.

19/99       Can you tell us about the project you are working on with Paola Kudacki and where that started?

SB      The project with Paola was definitely a reaction to this corrective version of beauty. I’d been working on a consulting job that had to do with colour proposals and consumer profiles, which was a lot fun to work on. When it came to an end I felt the need to do more with it, and channel it in a creative way that could be a campaign for that consultancy gig. There was so much happening, so much stuff popping up on my social. The project I did with Paola was aimed at young kids. There has been so much change these past couple of years challenging the status quo – climate change, social justice, identity, beauty and self expression. Younger people want to be seen for who they are, how they identify, and I was really inspired by seeing all of that, and the creativity that I love so much in makeup was really showing on their feeds. Paola and I got together and thought about how we could capture all of this energy in a creative way, so over the course of five days, we invited a group of cool New York kids, all different ethnicities and identities, over to the studio and took portraits of them. We started without any makeup, just started talking, and they really gave us a lot of direction. It wasn’t like Paola and I said ‘we are going to do this and that’. It was really by talking with them, and getting to know them in that short time that we had which dictated where I went with the makeup and how we photographed them. It was a really great project to work on, trying to capture the zeitgeist and the change of what we see happening. Going back to what we discussed before with the corrective side of beauty, this was much more about creativity and individuality. It was a project really aimed at young kids, but I think this is happening across the board in all different age groups; showing people for who they are, and how they like to contribute to that through makeup that is individual and expressive. And I think that is a great indication of where things are heading - it is inspiring, it is great. 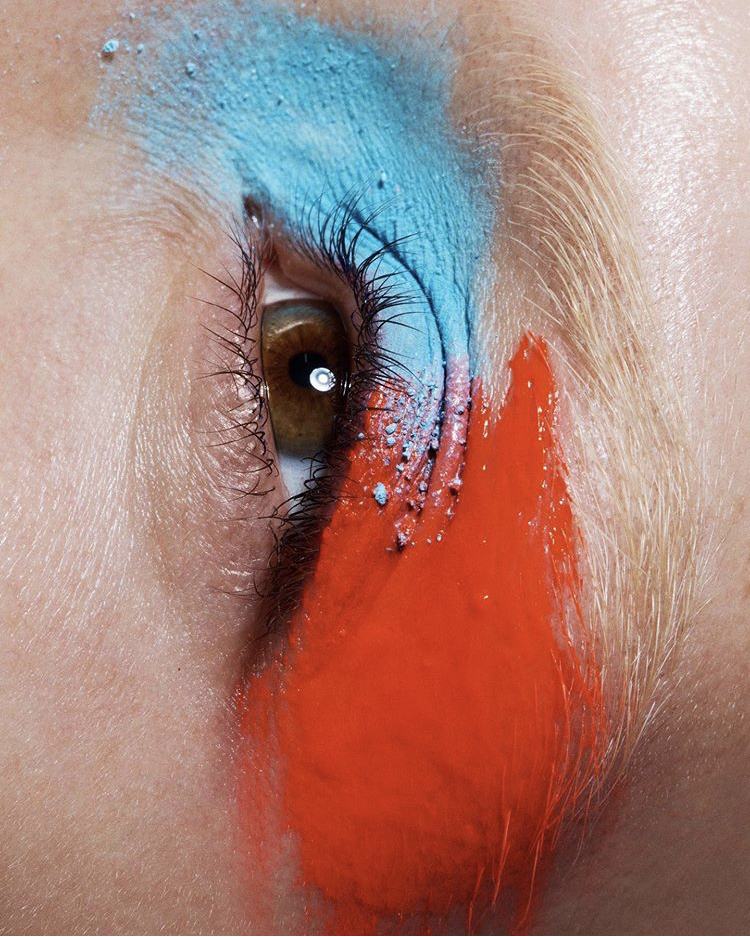 Younger people want to be seen for who they are, how they identify, and I was really inspired by seeing all of that 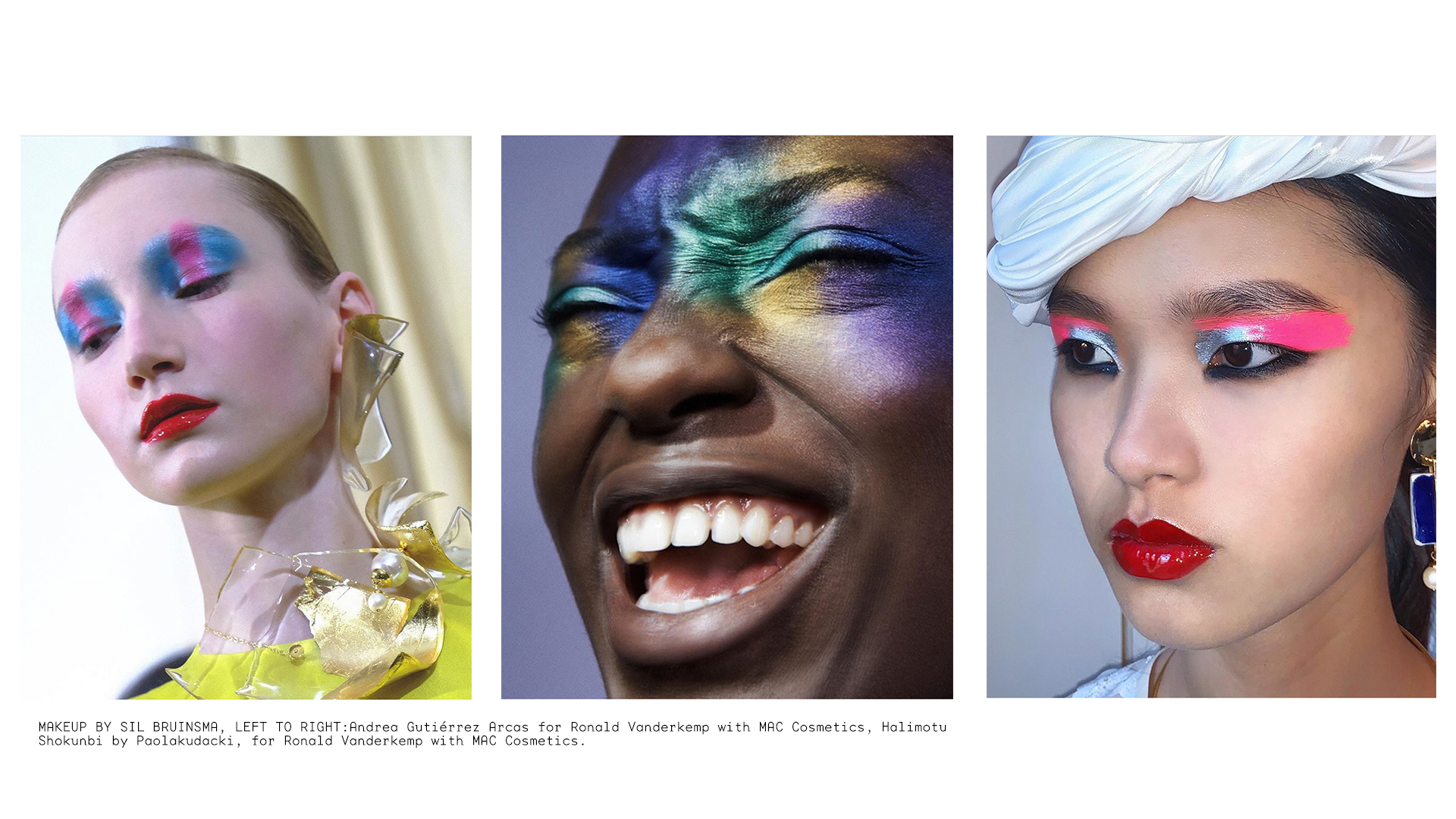 SB      I don’t really feel pressure to look a certain way. But I think that also has to do with getting older. When I look back at myself in my 20s, I probably felt that pressure more, more insecurities about things. As you get older there are so many other things that you get your self worth from, it’s not just the way you look anymore. You just kind of accept the way you look and hopefully you like what you see. In terms of work, I‘ve been lucky to often work with a group of people who have open minds and celebrate individuality. Of course I’ve had jobs where I’ve had to do more by the book, corrective looks, but lucky for me most of the jobs and most of the people I’ve worked with I have felt the freedom to be creative and not have to adhere to just one beauty ideal.

SB       Not really, I think most of the people you guys ask will agree to that. I do think when you get older you learn and apply how you see or do things, which prevents you, in a certain way, from repeating certain mistakes. It always bothers me when I see older female artists scolded for doing the same thing they have potentially always done, and people trying to prevent them of doing things that are true to them. That as they get older they can’t act or look a certain way. I think it is a very unfair way of treating women. Women who 20 or 25 years ago inspired you, now we are saying ‘no you can’t do that anymore’. I think it is really beautiful to see women as they age be who they are and be individual in the way they dress and express themselves. When it comes to applying makeup, I often work with young women. There is a pristine type of beauty to them, which can be captivating. It is great to work on, and an easy canvas. But I have to say, that the times you are really captured by someone’s beauty is 9 out of 10 times when you are working with the women who are older, in their 30s or 40s or beyond, who have lived life, maybe raised a few kids. There is a depth to that beauty that you don’t get when someone is in their late teens, early 20s. I feel that when you work on a face that has lines or wrinkles, it can be more beautiful.

SB      If you have a certain idea or something you want to do, do it right away. Don’t wait for approval, don’t wait for the stars to align, do it. You have to do it when you feel it. And go where the action is; don’t stay in that little town that you kind of want to go away from – you have to make things happen the moment you feel them, the moment you sense them.

SB       Pretty easy, a fresh haircut and a good workout sessions. Whether that is beautiful I will leave for others to decide but that is what makes me feel good in terms of visual appearance.

SB       No I don’t. It is the whole point of us being here; to evolve and grow and hopefully learn. I think that as you get older you can get a bit more balanced in your view, but on the other hand you need to stay open to new ideas and to look at things from different perspectives, new perspectives. I think we always have to grow and learn and stay connected. That is the purpose of us being here.